Rhododendrons: The King of Shrubs 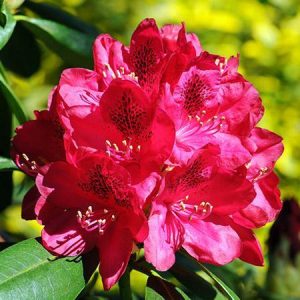 Rhododendron is a genus in the heath plant family (Ericaceae). It is a large genus with anywhere from 800 to over 1,100 wild species. The name Rhododendron comes from the Greek words, (“rodon” which means “rose”, and “dendron” which means “tree”), hence it is called Rose Tree. The Rhododendron species vast majority are native in the North Temperate Zone, especially in the moist acid soil of the eastern Himalaya and Southeast Asia, to the mountains of New Guinea. The flowers of Rhododendron are usually produced in trusses. Rhododendrons are also referred to as the King of Shrubs since Rhododendrons are regarded by many as the best flowering evergreen plants for temperate zones and landscapes.

Rhododendrons are known by many for its big leathery leafed shrubs with round clusters of white, pink and purple blooms. In Nepal, Rhododendron is the national flower, and in India, it is the state flower of Sikkim.

Rhododendrons are very dangerous, all parts of it, especially its leaves. It will show symptoms of stomach irritation, abdominal pain, abnormal heart rate, and rhythm, convulsions, coma, and death. Its honey should not be consumed as it is also toxic.

When should I plant Rhododendrons?

Best to apply a layer of compost under the shrub each spring. A two-inch layer of mulch is to be added to retain moisture and control the weeds, keeping much a few inches away from the trunk. In summer, water the plants if rainfall is less than 1 inch per week. In regions experiencing severe winters, protect evergreen Rhododendrons in the fall by wrapping burlap around them. Pruning is rarely needed and is done only to remove dead, damaged, or diseased branches anytime. However, when reducing height, it should be done after flowering in Spring. The Rhododendrons are not prone to any insects and diseases.

To learn more about Rhododendrons, don’t hesitate to reach out to us. We are more willing to help.

Subscribe for our weekly gardening updates and specials at Far West Turf & Nursery.